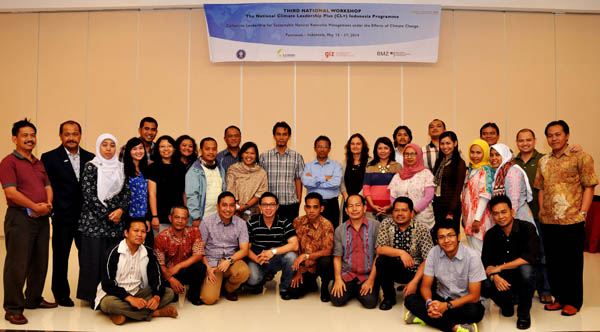 The “Collective Leadership for Sustainable Natural Resource Management” was the last workshop of three workshops series in the National Climate Leadership Plus (CL+) as a part of collaboration between CCROM SEAP and GIZ GmbH funded by the Federal Ministry for Economic Cooperation and Development German (BMZ). The workshop was held inGardenia Resort and Spa, Pontianak in 15-17 May 2014attended by participants represented from government officials, private sectors, and community workers from Civil Society Organizations (CSOs) and mainly coming from the two selected river basins; Citarum River in West Java Province and Kapuas River in West Kalimantan Province.

In the last workshop, the participants discussed and shared the prototype developed with other participants to exchange ideas and know-how. There were four prototypes from the Citarum river group, which focused on sanitation prototype in the lower basin of the river in Karawang area. In the upper basin, the prototyped focused on water quality improvement using microbes, recycle bank establishment and the story telling as tool for persuasion in behavioral changes. Whilst the Kapuas river group developed two prototypes. One group focused on environmental education for the primary school children and distribution of the trash bin for the river boat taxi operator and the other group focused on installment of trash net to capture trash in the city drainage in Pontianak.  They also were asked to reflect their own journey through the exercise “River of Life” and received leadership in climate change mentoring from Prof. Rizaldi Boer.

The workshop report can be downloaded here