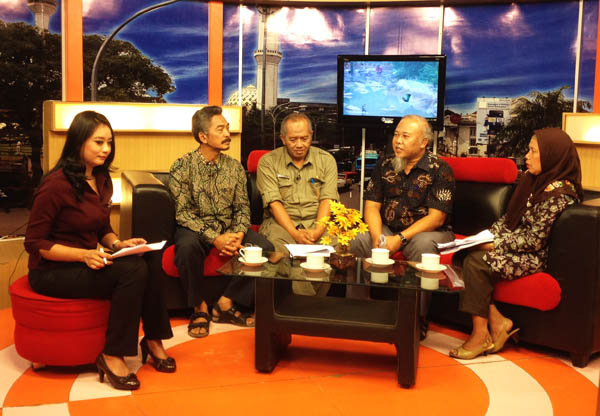 Television used to deliver the message about the importance of multi stakeholders supports for responding climate change issues in IWRM-CRB. TV talkshows were recorded and aired in two TV stations in Bandung (PJTV and MQTV). This activity was completed as a part of TA ADB 7189 Awareness Raising and Communication series of activity.Second talkshowwas recorded on 3 Febuary 2015, it was discussed about pilot action adaptation and mitigation towards climate change issue. The resource person were Dr. AnangSudarna (Head of West Java Province for Environmental Management Agency), Mr. RohadjieTrie (LPTT Plengan), Dra. Sri Rahaju (Pilot Agroforestry), and Dr. YuliSuharnoto (Hydrologist). It was explained in the talkshow about the six pilot activities, why it needs to be implemented, and the benefits of its activity to the surrounding communities in the area of CRB. It is clear from the talkshow that the implementation of adaptation and mitigation pilot activities is very important and can be the lesson learnt for multi-stakeholder regarding the urgency of adaptation and mitigation actions on climate change, and the pilot activities were design to help communities in handling this issue and is expected to be continued in the future.

Awareness Raising and Communication activity is a part of TA ADB 7189 Package E series of activities implemented by CCROM SEAP in collaboration with Ministry of Environment and Forestry Indonesia (KLHK), Regional Environmental Agency of West Java Province (BPLHD Jawa Barat), as well as Districts/Cities local government in the area of Citarum river basin. The aim of awareness rising activity is to design and to implement awareness programme on the topics of IWRM to respond climate change in CRB using various media and approaches relevant to the needs of the multi stakeholders (government, community, business sectors); to increase knowledge and understanding of the target groups about climate change, the causes, impacts, and initiation to mitigate and adapt to climate change, in the context of IWRM-CRB; and to help transform behaviour of targetted group to be more sensitive to the issue of climate change and its effects to the water resources, and support the process of strengthening institutionin managing the resources.