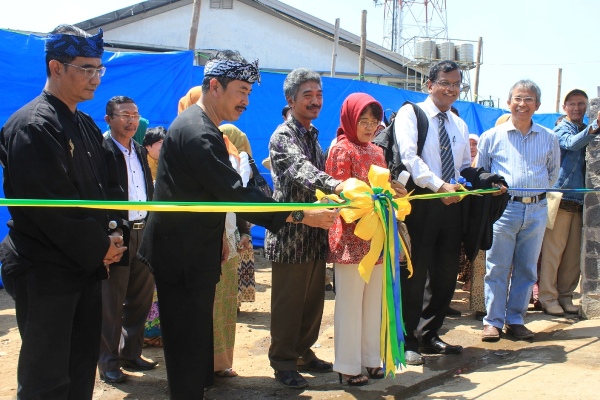 Since 2011, CCROM SEAP in close collaboration with Ministry of Environment and Forestry Indonesia (KLHK), Regional Environmental Agency of West Java Province (BPLHD Jawa Barat), as well as Districts/Cities local government in the area of Citarum river basin has started several activities of mitigation and adaptation to climate change as a part of ADB Technical Assistance (TA) for Institutional Strengthening for Integrated Water Resources Management in the 6 Cis River Basin Territory (Package E) as part of four packages of the ADB TA Grant in enhancing institutional capacity for integrated water resources management (IWRM) in the 6 Cis river basin territory.  The packages E is to promote climate-resilient development in the Citarum River Basin by reducing the vulnerability to climate change and improve the livelihoods of local communities. The capacity of government agencies will be strengthened through this package in order to mitigate climate change risk and adapt to its predicted impacts particularly in the sectors of water and waste management and agriculture. This package was commenced on 25 January 2011 and completed in July 2015.

Prior to completion of the project, TA 7189-INOorganized a 2-days workshop on Policies & Actions toward Enhanced Climate Resilience Citarum River Basin on 22 – 23 September 2015 at Ibisi Hotel Slipi Jakarta. This workshop aims to bring together researcher and policy makers concerned with enhancing the resilience of affected populations in Citarum river basins. Knowledge and lessons learned on the impact and adaptation and mitigation options of climate change on Citarum river basins will be shared and implications for policy makers drawn. The final workshop conducted back to back with the inauguration of MSW Management Pilot at GedeBage MarketKabupaten Bandungas one of the 6 pilot project implemented under TA ADB project.